How I Turned My 15 Minutes Into 15 Years 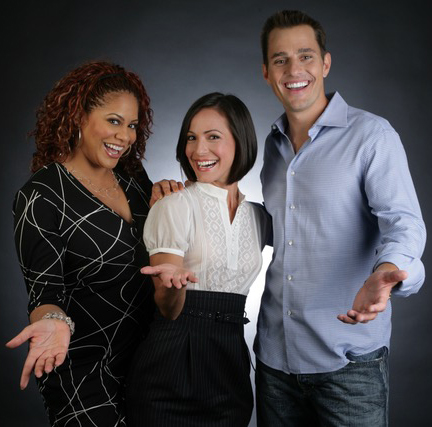 I finally purchased a new computer which forced me to go through my old (I mean really old) files to see what I could purge. In doing so I came across an interview I did back in 2007 for a novelist who was writing a book about “celebrity.”

After my run as a contestant on The Apprentice season one, I went on to host 8 seasons of Kidspace on HGTV. At the time of this interview I was hosting NBC’s live daytime talk show, In The Loop with iVillage.

For those of you who are wondering how I turned my 15 minutes of reality TV fame into a 15 year career, give this interview a read. I think my answers are telling. I believe it was my approach and handling of my post Apprentice celebrity status that kept me in this crazy business for the last 15 years.

Q: What is celebrity (expand)?

ME: I think, for some people, celebrity is like being the most popular kid at school, but on a MUCH bigger scale. It’s that need to be liked, admired and recognized. Some people think “celebrity” can bring them all of that.

After The Apprentice, I guess I was a celebrity of sorts. At first I embraced the spotlight. I took advantage of the parties and the VIP treatment. I even stumbled through my fair share of red carpet photo ops. Through it all I remember feeling inauthentic. Simply put, I felt like a phony. What was I famous for? Was I proud of what I was famous for? No I wasn’t.

Don’t get me wrong, I do not regret my Apprentice experience, nor am I disappointed in my performance, but at some point I understood that I needed to make more of the experience. I wasn’t satisfied with being just a TV personality. I guess celebrity in itself was not that important to me.

I take pride in working hard and being good at what I do. I was not good at being famous just for being famous. Pre Apprentice, I was a good senior marketing manager at Estee Lauder and now I am working hard to be a good television host on In the Loop with iVillage.

The other thing that was new and strange was my new celebrity social life. The Apprentice was the #1 show on TV. Our cast was invited to the hottest parties. I spent sooooo much time networking at parties, events and premiers and less quality time with my close friends and family. I missed long chats with my best girl friends. I missed date nights with my boyfriend (now husband). I missed long dinners with my family.

I feel for the child stars that have always been in the limelight and have a hard time building real friendships, the kind that can save your life. I realize now more than ever how important it is to keep quality friends, family and even respected colleagues close. These are the people who won’t be afraid to tell you the truth no matter how much it hurts.

I also think celebrity can slow down your self-growth. When you’re in the spotlight you’re always “on” constantly presenting a version of yourself …one that entertains your audience/fans. It’s easy to lose sight of who you really are, what’s most important to you and who you want to become. It’s easy to get caught up in the excitement and forget about your long term happiness.

Q: Your achievement in business is remarkable, especially for someone your age at the time (GE and Estee Lauder) have you abandoned the corporate world for a career in front of the camera?

ME: I may have abandoned the corporate world, but I have not abandoned the business world. TV is a business. A very tricky business.  Eventually I hope to have enough of a name to launch a brand of my own. I have a few ideas.

Q: Fame/celebrity for you was almost unplanned, its not like you spent years pounding the pavement, bartending, going to acting school, etc (did you?) so you may not have been prepared for fame as it happened for you, what was that experience like and how has it shaped who you have become?

ME: I don’t consider myself famous. I’m just on TV. I love hosting because I get to learn something new every single day. It’s one of the most challenging jobs I’ve ever had and I have so much fun doing it. I welcome the celebrity aspect because I think I’ve learned to manage it and to use it to my advantage.

Q: When you got the job as Tony Danza’s sidekick, did you feel prepared to take on such a big job?

ME: Absolutely not. I had no idea what I was in for and in retrospect that was a good thing. I’m glad that my role was small and manageable. I think what the executive producers liked about me was that I wasn’t over trained. I was spontaneous and somewhat natural on camera. Again I just had fun with it and didn’t say no to anything they asked me to do. Whether it was racing with Dale Earhardt Jr. or going to trapeze school with Tony Danza, I jumped right in! I hope I never lose that spontaneity.

Q: Why didn’t you continue for the second season of The Tony Danza Show?

ME: My role was never fully defined and proved not to fit in with the formula of the show, but in just one season I learned so much. I know that I will be a better co-host of “In the Loop with iVillage” because of that experience and my experience on Kidspace (HGTV).

Q:You are in a rare group, most people who come from reality shows don’t continue to work on television, its really just you and Elizabeth Hasselbeck (and maybe one or two others) so why do you think you’ve been a success when really hundreds of others never could cut it?

ME: I ask myself the same question everyday. I have no idea why I stood out. I guess producers saw someone who was not frightened by the camera and who could connect with viewers. My first request came from TLC. They wanted me to host a show called “Help Wanted”, but my contract did not allow it. Next I got an email from Buena Vista to audition for “The Tony Danza Show”. I didn’t have nor did I seek out an agent after “The Apprentice”. I was assigned an agent when I was presented with the “Help Wanted” contract. Things sort of fell into my lap thanks to “The Apprentice”. I like to think I landed the role of host of “Kidspace” (HGTV) and co-host of “In the Loop” because of my experience and because of my authenticity, but that’s just what helps me sleep at night. There are no concretes in this business.

Q: When you are on such a big show like The Apprentice and then Tony Danza, do you start to get addicted to the attention?

ME: Not really. It’s fun at this level, but I can imagine it getting very tiring and intrusive if ever I were to become really famous. Again, I was 27 when “The Apprentice” ended. I wasn’t a kid who needed attention. I liked my life, my friends and my family. The other positive side is being able to give back. I once had an organization donate $10,000 to a charity for a few publicity shots. That’s rewarding.

Q: There is a great deal of research published this year about the emerging adult population (the 18-25 set) saying that they are more narcissistic then ever before and their parents contribute to the idea they are “special” and should be famous despite the fact they may not have any talent, what are your thoughts on this need for fame at all costs?

ME: So frightening. Can someone tell those poor kids that finding their true talent and passion (I believe we all have one) is far more rewarding then faking someone else’s dream. I definitely think that both You Tube and reality television has encouraged people to seek out fame at any cost. Fame equals money and happiness in most people’s mind. Maybe someone needs to do a show about the aftermath; we can call it The 16th Minute.

I just read “Measure of a Man” by Sydney Poitier and I was blown away by his message. Everyone should read that book.

Q: In the business world there are pretty clear cut steps as to how to become successful, not so in the entertainment world, can you comment on that and the frustration about how much is out of your control, etc. Television is so subjective.

ME: In business you think in terms of bottom lines, return on investments (ROI), marketing, sales numbers and lots, and lots of statistics and charts. In television there is just your gut. I can’t really speak to this subject other than to say, I’m too new to the business.

I still show up to every audition like I did my first….on time, over prepared, full of energy and now 10 times more confident. I still give 110% to every job whether it’s big or small.

As a kid growing up we did not

Ribollita (click on link for video) is historically a Tuscan

Below are 5 killer cocktail recipes to help

This error message is only visible to WordPress admins


Error: API requests are being delayed for this account. New posts will not be retrieved.

Make sure this account has posts available on instagram.com.